ℑ first became aware of the ABC series Galavant while I lived in Oklahoma and was visiting family in Texas. We did not have television service, but they did and the series was being advertised as an upcoming attraction. The medievalist trappings evident in the advertisement attracted my attention--because I was working on this webspace then, and its related projects--but I thought little else of it until I saw it appear on Netflix. Remembering having thought of it, I added it to my family's queue and promptly forgot about it again, being occupied with much else.
Recently, though, it came to mind again. My wife and I were looking for something to watch with our daughter, something with which we could fill some idle time together and which would not necessarily provoke the kinds of questions we know are coming but do not look forward to being asked yet. And we stumbled upon Galavant again, settled in to watch, and, well...there's a reason I'm moving ahead on a rewatch series now.
Brief as the series is--lasting only two seasons on ABC, though there are some rumors that Netflix will take it up for another--the series will not be the sprawling thing that the Voltron: Legendary Defender rewatch was, nor yet the more focused flagship that the Game of Thrones rewatch has been. But, as a program featuring on prime time broadcast television, Galavant is one that attracted a fair bit of attention, and how it instantiates medievalism needs some attention therefore. I hope to make a fair go of it.
I hope you will begin reading the series here soon.

Posted by Geoffrey B. Elliott at 11:00 AM No comments:

We'll Return You to Our Regularly Scheduled Programming after This Message

𝔉or a while, now, there's been a weekly Thursday post noting progress through a cartoon series. In recent months, it's even been a regular thing. But that series is done, and a bit of a break is in order. If nothing else, I need to do a bit of cleanup on this blog and look into a few other things. So it may be a bit before there's another regular series popping up here.
Worry not, however; there are other series intended, as well as the occasional stand-alone piece. And we are always happy to have more contributors; if you've got an idea, please send it our way. We'd love to hear from you.
As always, thank you for reading!
Posted by Geoffrey B. Elliott at 11:00 AM No comments:

Voltron: Legendary Defender (Re)Watch 8.13, "The End Is the Beginning"

Voltron: Legendary Defender finds an end--and a promise of a new beginning.

The towering titans that are Voltron and Honerva's Robeast face off, resuming their melee from previous episodes. Recognizing the threat to the local population, the former tries to move the battle into the hinterlands. The effort is minimally successful.

Honerva renews the ritual to pierce the bounds of reality, draining Voltron's energy to do so. Pursuit continues, though the reality left behind crumbles behind them, and Voltron emerges into a strangely liminal space between realities.

Honerva presses her attack upon Voltron--and upon entire realities. In her rage, Honerva purposes to unmake all, and Voltron is rebuffed by the effects of her attacks on the other existences, glimpsed in fleeting images as they are undone. At length, only one remains, a solitary chain of causality ripe for uncreation. It, Voltron is able to defend, rejoining melee with a renewed purpose.


Honerva is driven back, along with the Paladins. The latter are able to convince Honerva to repent and work to restore the realities that were undone. Allura remains behind, as well, to the sadness of the other Paladins, and the universes are restored.

In the denouement, the Paladins and their allies take stock of what has happened. Altea is restored. The Galra Empire is pacified and incorporated into a federated government. Peace talks in Allura's name work to ease tensions. The Paladins go about their lives, and matters give every appearance of being well. The Lions depart of themselves, vanishing into the cosmos, Voltron's time having ended at last. 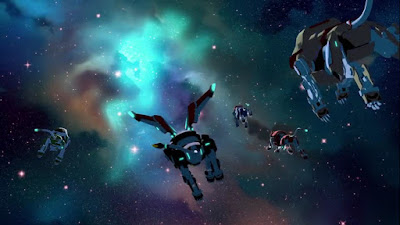 The series finale, in addition to making several covert comments about social matters, returns to the Marian associations of Allura. As is noted elsewhere in the comments about the series, Allura is something of a stand-in for the Virgin Mary, whose efforts and experience lead to salvation in the Christian ideology of medieval Europe. As is typically conceived, Mary is a preferred if not necessary intercessor for Christian prayer and forgiveness, the agent through which mercy is achieved--and the episode puts Allura in the position of offering mercy to Honerva and acting to provide salvation to all. While the framing is not restricted to the medieval in its overtones and evocations, it makes its case at the end of a series long established as decidedly connected to the medieval, so the resonance with medieval notions sings out strongly.

On an entirely personal note, there is a strange combination of relief and sadness in writing up the final episode. This project has, admittedly, taken longer to complete than ought to have been the case, and the way it was handled early on leaves a fair bit to be desired. (I'm sure some will say that the way it has continued to be handled does, too.) But it is done, now, and while there is pride in getting it done and relief that no more needs doing on it, there is some sadness that there is not more to do with it--at least not here. My words will not be the last written on the topic, though, or I hope they will not, and I look forward to reading what others will have to say. I can hope that what I have said will prove useful to them as they take up their own parts of the work.
Posted by Geoffrey B. Elliott at 11:00 AM No comments:

ℑt was noted in an earlier post that there would be a bit of a survey of members' planned attendance at the 2019 International Congress on Medieval Studies at Western Michigan University in Kalamazoo. The promised survey is at the URL below:

The form asks after membership, planned attendance, plans to stay past the Congress's closure on Sunday, and thoughts about the time after that closure. Responses will determine whether the Society tries to reserve rooms at various places, so your reply is greatly appreciated.

We hope to see you at the 'zoo!
Posted by Tales After Tolkien Society at 4:46 AM No comments:

The final confrontation of the series continues in the penultimate episode of Legendary Defender.

Honerva continues to enact a ritual that will allow her to find a universe where she can live in love with Zarkon and Lotor--and that will destroy all other realities. The Paladins and the Atlas begin to rally in the attempt to stop her. Pidge figures out how Honerva's work is proceeding, and action resumes.

It also resumes on the part of Honerva and her supporters. Honerva rallies her pilots against the Paladins, and battle is joined. Honerva's powers prove formidable amid the melee, which draws on with the help of one of the Altean Robeast pilots.

Amid the fight, Coran makes his way to counteract the destabilizing effects of Honerva's ritual, aided by others.

The efforts come too late, however, as Honerva effectively pierces the boundaries between realities and flees. Keith urges pursuit, and assistance comes in the form of several Balmera that arrive to render help. They empower Voltron and the Atlas, that they may give chase to Honerva across realities--and they do, uniting into a single, colossal construct of immense power.

Thus uplifted, they rejoin melee against Honerva, chasing her through realities as they begin to collapse in the wake of her passage. And Coran works with the Balmera to mute the effects of Honerva's predations, enjoying some success. They are joined, in turn, by Galra led by Krolia and the remaining Blade of Marmora; the combined efforts further stabilize reality as the fight between Voltron and Honerva continues.

The efforts do not suffice, however. The work of Coran and his company cannot be sustained, and Honerva leaves Voltron behind en route to her preferred reality. They continue to pursue, emerging after her into a reality where Altea and the Galra homeworld remain, where Zarkon lives at ease, and where Lotor is a boy at study. The reality's Zarkon accepts Honerva's appearance after an initial challenge. The reality's Lotor, however, is not deceived, and a final confrontation ensues as Voltron appears upon the reality's Altea.

It makes sense that there would be little new material introduced by the current episode; it is the next-to-last, so it should be more concerned with ending things than with introducing new ones. And it is the case that more of what has pervaded the series appears in the present episode, including instances of the deus ex machina that have received comment. But, as is noted elsewhere, such things pervade the medieval inspirations of the series no less than the Manichean allegory that is almost abusively obvious in the depictions of Honerva and the ennobled Voltron in the episode. (It is a nice touch that the appearance of the towering white-and-gold figure of the enhanced Voltron inspires terror among the people in other realities; angelic beings such as Voltron is figured to be tend to prompt such responses, however benevolent their intent.) As such, the series remains rooted to its inspirations even as it comes almost to its finale, a sort of a return to its thesis in advance of moving forward one last time.
Posted by Geoffrey B. Elliott at 11:00 AM No comments: