Doing More to Get Ready for #Kzoo2019

𝔗he sneak preview of the call for papers for the 54th International Congress on Medieval Studies is live, and it has the following in it: 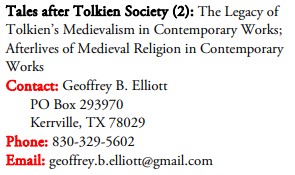 It seems therefore a good time to return to an earlier post and to expand upon it. As noted, the Society has proposed two sessions, about which more below:


The first session, a paper session titled The Legacy of Tolkien's Medievalism in Contemporary Works, will examine the continuing influence of J.R.R. Tolkien on conceptions of the Middle Ages and medieval prevalent in academic and popular cultures. As has been amply attested, Tolkien’s medievalist work in his Middle-earth corpus has exerted an outsized influence on subsequent fantasy and medievalist popular culture, and, following Paul B. Sturtevant’s assertions in The Middle Ages in Popular Imagination, it is largely or chiefly through popular cultural engagement with the materials that people—both the general public and those who become the students and scholars of the medieval—develop their early understandings of the Middle Ages. Decades on, Tolkien’s influence on popular culture—books, yes, but also movies, tabletop games, video games, television series, music, and other elements of popular understanding—continues to be felt, and continued examination of that influence is therefore warranted.

The second session, a paper session titled Afterlives of Medieval Religion in Contemporary Works, will look at how the post-Tolkien works that are the Society's focus appropriate and misappropriate medieval religious constructions. That formal religion was a central element of the European medieval, broadly conceived, is a conventional wisdom that is reflected both in the typical programming of the Congress and in the pages of Speculum, among others—yet many medievalist works, particularly those in mainstream popular culture, neglect or shy away from overt religiosity, or else they invoke it partially and only to specific effects, and in ways that do not appear to align well to the functions of the medieval church. Untangling the uses, misues, and avoidances of a key element of medieval culture in works that purport to be medieval or medievalist in their intent bears examination, and papers in the proposed session would be directed to those ends.


The Society will be happy to entertain submissions for either session. Personal information forms (which the Congress requires) should be available on their website beginning in July; please send yours along with an abstract of 100 to 300 words, and Society President Geoffrey B. Elliott will be happy to read it. Submissions to The Legacy of Tolkien's Medievalism should go here; submissions to Afterlives of Medieval Religion should go here--or they can go by post to the address noted above.

Get your submissions in, and spread the word!
Posted by Tales After Tolkien Society at 7:12 AM